Bad Boy Chilli Mash began in Lostwithiel by Paul Colledge who had a passion for chillies (and cooking and beer). They started growing chillies at home and it wasn’t long before, they started making chilli mashes for friends and family. Everyone loved it! 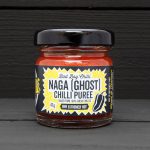 Naga Ghost
This is made from 100% Jolokia Naga Chillies only and contains no extract, so what you have is 100% preserved Naga Chilli heat. 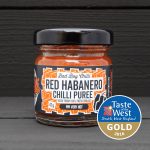 Red Habanero
The habanero chili comes from the Amazonas region, and from there it was spread through Mexico. One domesticated habanero, which was dated at 8,500 years old, was found at an archaeological dig in Mexico. 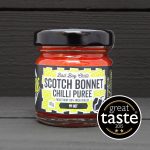 Scotch Bonnet
Scotch Bonnet, also known as Boabs Bonnet, Scotty Bons, Bonney peppers or Caribbean red peppers. Found mainly in the Caribbean islands, it is also in Guyana (where it is called Ball of Fire), the Maldives Islands and West Africa. 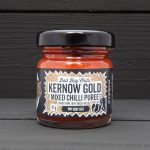 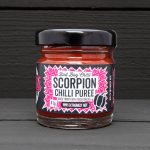 An awesome tasting Purée handmade using 100% fresh chillies, a great way to instantly add heat and flavour to your favourite cooking dishes.The Scorpion chilli, named after its scorpion shaped tail, is well known for its great flavour and mouth watering heat, once regarded as the hottest chilli on the planet and another favourite with the chilli heads. Trinidad Scorpion is rated 1.2,000.000 SHU and can be used in any cooking. You can expect to get at least 15+ meals from each jar. 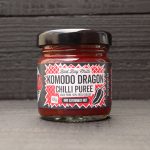 The Komodo Dragon was produced from 2015, and went on sale in Tesco stores. Cultivated in Blunham, Bedfordshire, the pepper is notable for what was described as a “delayed reaction”– Eleanor Mansell, who buys chilli peppers for Tesco, said , “At first you can taste a wonderful hot fruitiness, but then after about 10 seconds the full might of this little demon hits you and your whole mouth is aglow”.Komodo Dragon is rated 1.4,000.000 SHU. 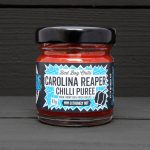 Carolina Reaper is super hot and boasts the title of the hottest chilli on the planet, but it still has great flavour. The purée is an easy way to add flavour and heat to your cooking, just an eighth of a teaspoon (or less) can spice up your favourite dishes: start small and add extra if you want that extra heat. The Carolina Reaper chilli is a cross between the Scorpion and is rated 1-5,000.000 SHU.

A shake on style condiment sauce made from fresh Naga, Scorpion or Carolina Reaper chillies which gives a fantastic super hot taste and flavour which will get your tongue melting in your mouth: a favourite of ours… but use in small doses! 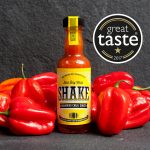 A shake on style condiment sauce made from fresh habanero chillies which gives a fantastic vibrant taste and flavour which will get your tongue tingling. Gold Star in the Great Taste Awards. 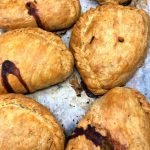